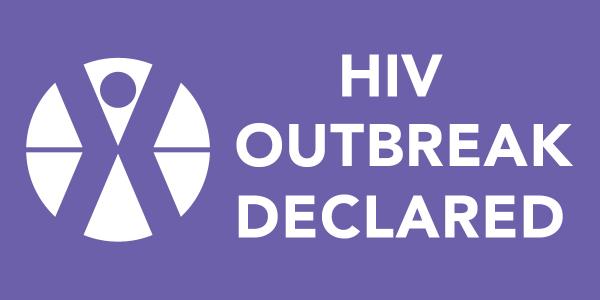 June 25, 2019 - TBDHU is declaring an HIV outbreak that is centred in the homeless/under-housed population in the city of Thunder Bay. This is the same population that is disproportionately impacted by the ongoing tuberculosis outbreak.

The outbreak declaration comes after a recent spike of cases in May and June bringing the total number since January 1st to 8 cases with 2 additional cases under investigation. Transmission is through sexual activity and sharing needles for injection drug use. There are likely further cases that have not yet been diagnosed.

The total number of new HIV diagnoses in the entire health unit area in 2018 was 11.

In addition to work done by health care partners and the Thunder Bay Drug Strategy, the Health Unit has been closely monitoring HIV and other infectious diseases through increased testing, and outreach nursing and harm reduction programming. Distribution of clean needles and other harm reduction supplies is an important part of preventing HIV.

The Health Unit is working on an enhanced HIV/TB strategy to guide public health work in this area. As well, ongoing engagement of partners will strengthen a community-wide approach that considers prevention, testing, harm reduction and improving access to health care and other services for people.

Human immunodeficiency virus (HIV) is a virus that attacks cells that help the body fight infection, making a person more vulnerable to other infections and diseases. It is spread by being in direct contact with certain bodily fluids of a person with HIV, most commonly through sharing injection drug equipment or unprotected sex. If left untreated, HIV can lead to AIDS (acquired immunodeficiency syndrome). AIDS is the late stage of HIV infection that occurs when the body’s immune system is badly damaged because of the virus.

HIV cannot be cured. However, effective treatment options are available that can reduce the virus to undetectable levels at which point transmission doesn’t occur. The general population is not at increased risk due to this outbreak.